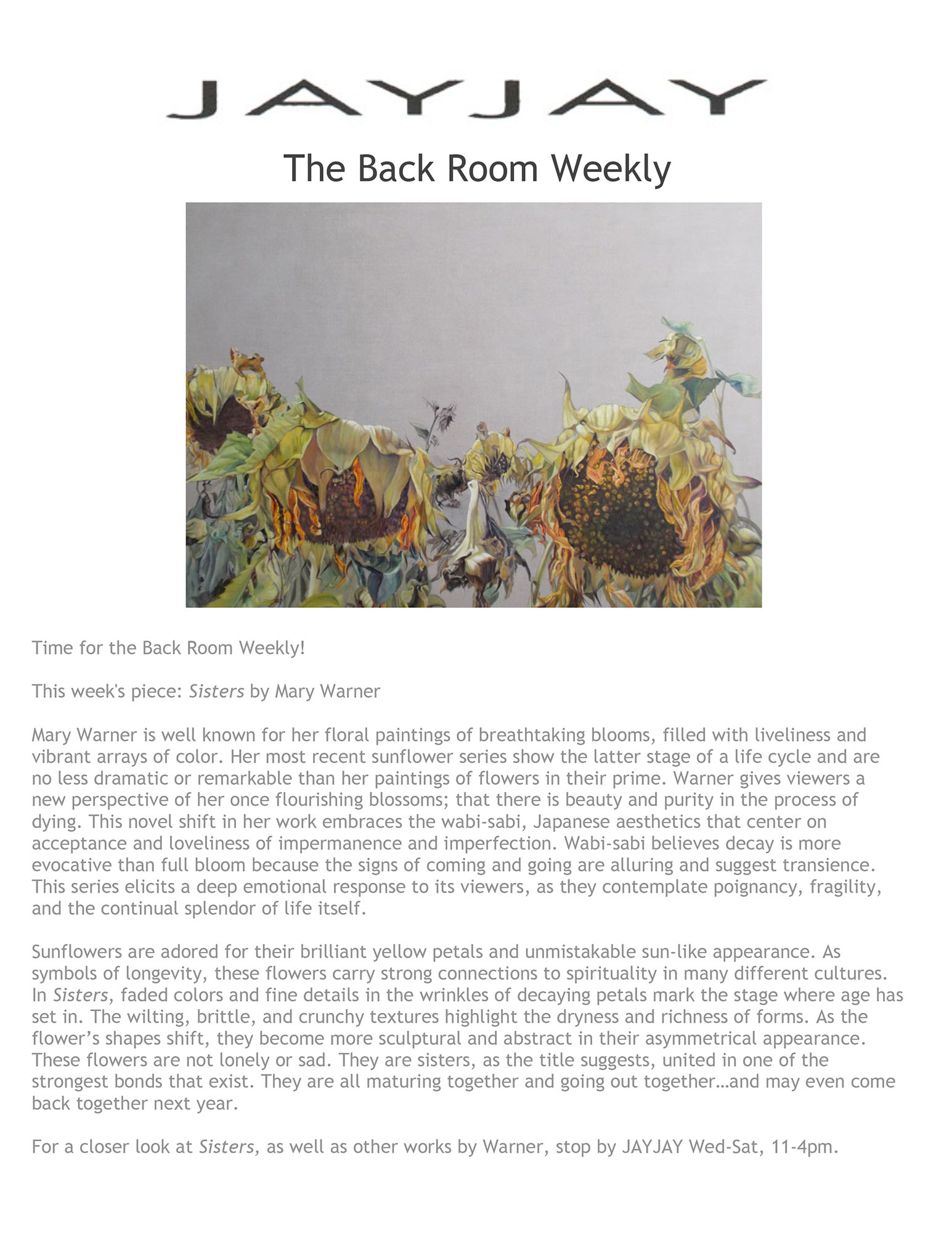 Time for the Back Room Weekly!

Mary Warner is well known for her floral paintings of breathtaking blooms, filled with liveliness and vibrant arrays of color. Her most recent sunflower series show the latter stage of a life cycle and are no less dramatic or remarkable than her paintings of flowers in their prime. Warner gives viewers a new perspective of her once flourishing blossoms; that there is beauty and purity in the process of dying. This novel shift in her work embraces the wabi-sabi, Japanese aesthetics that center on acceptance and loveliness of impermanence and imperfection. Wabi-sabi believes decay is more evocative than full bloom because the signs of coming and going are alluring and suggest transience. This series elicits a deep emotional response to its viewers, as they contemplate poignancy, fragility, and the continual splendor of life itself. Download the full article pdf 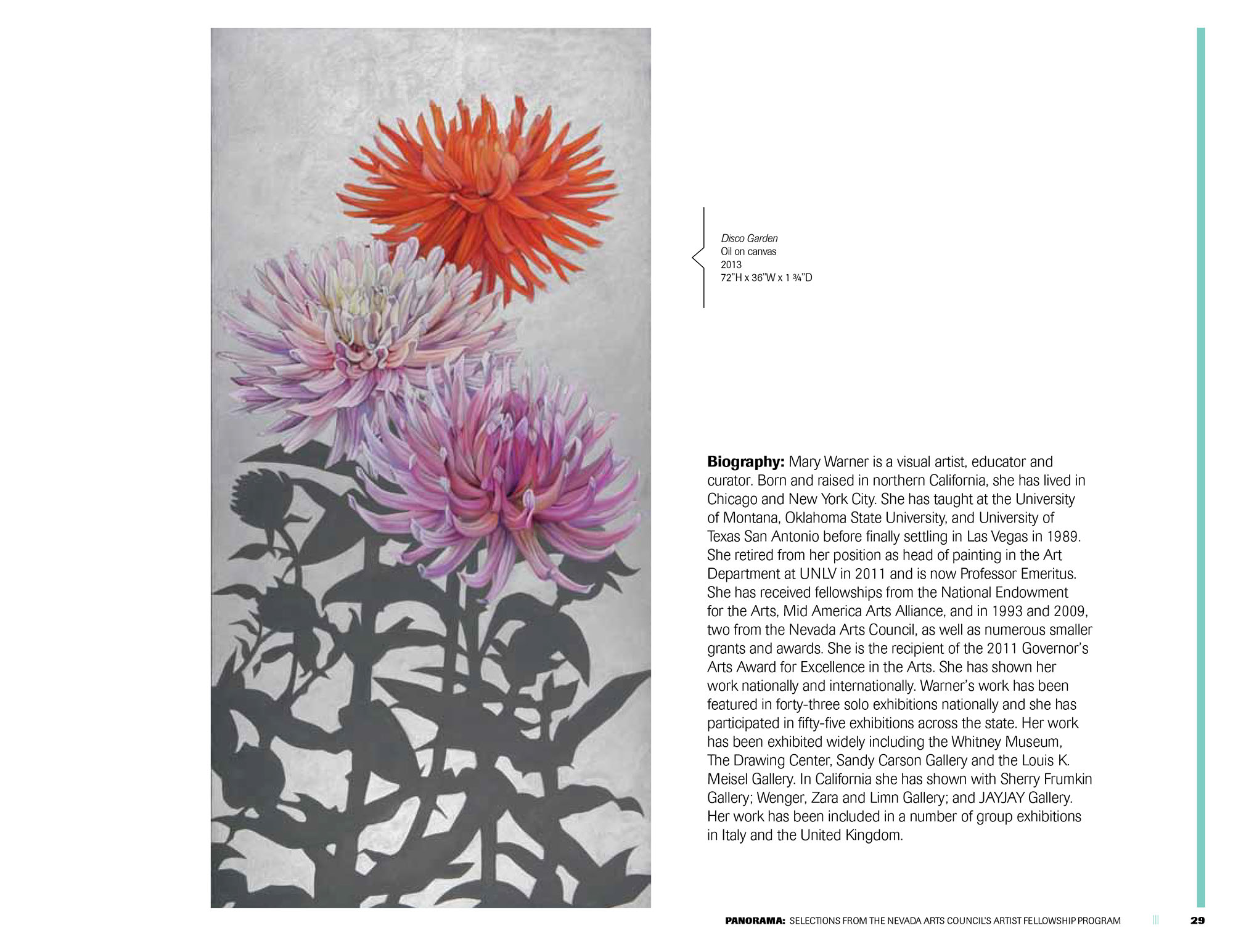 Biography: Mary Warner is a visual artist, educator and curator. Born and raised in northern California, she has lived in Chicago and New York City. She has taught at the University of Montana, Oklahoma State University, and University of Texas San Antonio before finally settling in Las Vegas in 1989. She retired from her position as head of painting in the Art Department at UNLV in 2011 and is now Professor Emeritus. She has received fellowships from the National Endowment for the Arts, Mid America Arts Alliance, and in 1993 and 2009, two from the Nevada Arts Council, as well as numerous smaller grants and awards. She is the recipient of the 2011 Governor’s Arts Award for Excellence in the Arts. Download Pdf for the full article

The title, Some Fine Women, understates. “Many fine women” is a more accurate description of a robust multimedia show with a whopping 60-plus works by 36 artists…

Women artists, the show insists, interpret the world differently than men, whether through form, shape, color or material. The position is less accusative—men-hating feminists are so last-century—than matter-of-fact. But the message, that culturally dominant notions of beauty and behavior are the legacy of male desire, comes across explicitly in some works, or, in the case of Edith Beaucage, with a kind of fiendish joy. Although her paintings recall misogynistic portraits by Picasso and de Kooning (painterly canvases thick with contempt), Beaucage’s buxom-nosed women are light-hearted. She deconstructs the canon of female beauty with a disarming naiveté.

…Mary Warner’s paintings—masterful works of waning sunflowers—take on the canon in a different way, by turning clichéd symbols of female vulnerability into botanical aliens. Warner’s florals verge on abstraction, the details functioning like theatrical microcosms where the fervid drama of creativity takes place… Read article

Conduct a quick and dirty survey of art history, and roughly three recurring themes bubble to the surface: mortality, the female form and flowers. A whole mess of flowers. So much so, in fact, that as a subject, the flower can seem a bit pedestrian; the phrase “over it” comes to mind. And painting? What new revelations about such a staid subject can possibly be achieved through a centuries-old medium?

You might be surprised. But in the case of Mary Warner’s Heavy Petal, opening this Friday at Trifecta Gallery, it’s not so much a question of what the painting reveals about the flower as what the flower can say about painting… Read article

‘Women Under the Influence’ a lush showing of painting

“Women Under the Influence” sounds like a show about alcoholics, but the influence these women are under is the seductive qualities of paint, a lush and sensuous medium.

The women included are Mary Warner, a nationally known artist originally from Sacramento who has taught for many years at the University of Nevada, Las Vegas. The others are her former students Wendy Kveck and Jane Callister, both university art professors themselves, Kveck at UNLV and Callister at UC Santa Barbara.

It’s also a show about how artists influence each other. In this case, how Warner has influenced her former students and how their works relate to each other.

Warner is the old master of the group, her large-scale paintings of flowers overtaking the viewer with their sensuality. Warner’s blooms seem to reach out and envelop the onlooker. These super-close-ups compel not only by virtue of their beauty, but also by their unrestrained presence.

Warner is perhaps best known for her paintings of oversized blooms on shaped black velvet canvases. Her new works are more subdued in a way, but no less demanding of our attention.
Read article 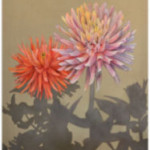 It may be a spaceship, hovering over a paint-by-numbers background. Or perhaps a nebula of fireworks, caught at the exact moment of explosion before color vanishes into annihilating shadows. To call Mary Warner’s recent canvases “portraits of flowers”—or worse yet, “flower paintings”—misses the point. They are not really flowers at all… read article 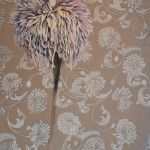 JAYJAY celebrates the hot temperatures of summer with an equally hot exhibit featuring three women artists who share similar interests in the sensuous and luxurious medium of paint. This is also an opportunity to explore the effects of inspiration, mentoring, and influence among artists who share and critique each other’s work. read article 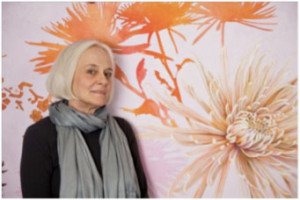 A recent recipient (2011) of the Governor’s Arts Award for the Excellence in the Arts Category, Mary Warner is a visual artist, educator and curator. Born and raised in Northern California, she has lived in Chicago and New York City as well as teaching at the University of Montana, Oklahoma State University and University of Texas San Antonio before finally settling in Las Vegas in 1989. She retired from her position as head of painting in the Art Department at  U.N.L.V. in 2011 and is now Professor Emeritus. Over the years she has received an N.E.A. Individual Fellowship, a Mid America Arts Alliance Fellowship and two Nevada Arts Council Individual Fellowships, as well as numerous smaller grants and awards. She is the recipient of the 2011 Governors Art Award for Excellence in the Arts. She has shown her work nationally and internationally. Mary Warner’s work has been featured in forty-three solo exhibitions nationally and she has participated in fifty-five exhibitions across the state. Her work has been exhibited widely outside the state including the Whitney Museum, The Drawing Center and the Louis K Meisel gallery in New York. In California she has shown with Sherry Frumkin Gallery (Santa Monica) Wenger, Zara and Limn Gallery San Francisco and JAYJAY Gallery Sacramento, Sandy Carson Gallery, Denver as well as being included in a number of group exhibitions in Italy and the UK. 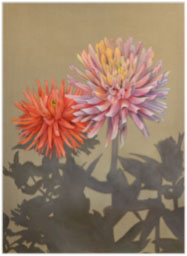 As an artist and curator, Mary Warner has been critical to the development of the local arts community. She was one of the founding members of CAC. She alternated between president and vice president in its formative years. She served for many years on the exhibition committee.